This post has been written by Bill O’Keefe interim Executive Vice President for Church Engagement and Vice President for Government Relations and Advocacy at Catholic Relief Services. Mr O’Keefe was a guest speaker in our webinar “How Can Advocacy Enhance Implementation Science in Nutrition?” on Friday, February 15th 2019. In which he spoke about his real-world experiences and shared tips and tools on how to become an effective advocate for nutrition.

The recent outbreak of Ebola in the Democratic Republic of Congo is a reminder of the disease’s devastating 2014 eruption in West Africa that also impacted the United States. Ebola dominated U.S. headlines for months and captured nationwide attention; yet no one infected with Ebola while in the U.S. died from the disease.

How puzzling is it then that another, far greater global health crisis that has been regularly stunting the brains and bodies of little children and cutting short the lives of millions annually, continues to go virtually unnoticed. Malnutrition, or more specifically, undernutrition, can impact a child for a lifetime or erase her existence altogether.

Perhaps because malnutrition is an ongoing, chronic issue that fails to grab daily headlines, it is easy to overlook. And perhaps that is why such a minuscule amount of resources—less than one percent of global development assistance worldwide— is currently devoted to addressing it. 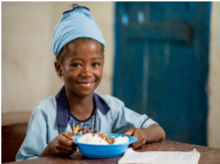 Whatever produces such a discrepancy between global need and the apportioned assets, advocacy can balance things out. “Advocacy” is the act or the process of supporting a cause or proposal. It includes various strategies that influence decision making at local, national and international levels. It is generally organized around the resolution of a problem. Advocacy can include using multimedia to form public opinion, educating decision makers, organizing public events, researching issues and creating coalitions. Effective advocacy requires an understanding of the problem or issue, solid analysis of the political environment, and a coherent proposal for its solution.

Advocacy is one of the most effective ways to fix problems. When an unjust policy or system is changed because of advocacy, millions can benefit. Our elected officials work for us, and while they may not always take positions we desire on issues, they do listen to constituents, so it’s important to make our voice heard.

As the Vice President for Government Relations and Advocacy at Catholic 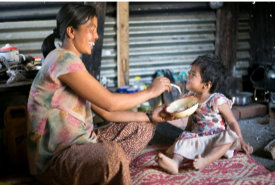 Relief Services, I do advocacy for a living.  When I meet with lawmakers, I try to reduce big, difficult-to-picture issues, like “global malnutrition,” down to something easily understood and manageable. I might begin by telling a story about the difference a specific program had on a single person.

I might tell them, for example, about a man named Thomas Awiapo from Ghana, who was only 10 years old when his parents died. He and his brothers were left to fend for themselves. His two younger siblings perished from malnutrition and disease, and his older brother ran away and was never seen again. One day Thomas was offered a hot lunch and a small snack on the condition that he attend school. He did not want to stay all 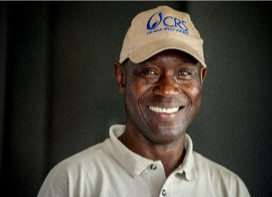 day in a classroom, but because of the nutritious and satisfying food, he did. Fast-forward many years and Thomas now has an advanced degree and a family of his own. He says his children never go to bed hungry the way he did because he can provide for them. The U.S.-funded program that kept him alive and gave him an education is no longer serving his village because, over time, the community itself began providing nutritious meals for its school children.  The program was no longer needed.

I let lawmakers know that while 5.4 million children like Thomas’ brothers still die every year from mostly preventable causes and malnutrition, that we have made massive progress, and with their help, can continue to do so. Over the past 30 years, an estimated 100 million children like Thomas have been saved— a fantastic achievement. Global nutrition programs, funded in the U.S. foreign aid budget by the Global Health account, Food for Peace non-emergency programs and Feed the Future, are critical to child survival and need to be protected and expanded.

An important point to share with U.S. Congress is that a growing body of evidence also 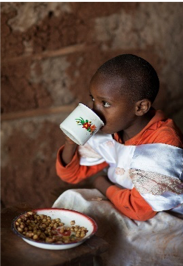 suggests a strong positive correlation between nutrition and lifetime earnings. This is particularly true for a child’s first 1,000 days of life. For every $1 invested in nutrition, we see a $35 return. With information like this, as well data generated from global nutrition programs, advocacy can be used to convince law makers that nutrition is not only one of the best buys in development, but also one of the most underfunded.

Lawmakers are also concerned about the efficient use of taxpayer dollars. Implementation research  can be used by advocates to  show funders and policy makers that we are being judicious with their resources, that programs are being used to implement evidence-based practices, and that we drive efficiency in programs by pooling knowledge, experience, learnings, and not ‘reinventing the wheel’. Members of Congress will be more likely to provide expanded resources for global nutrition when they trust those resources are being used in the best way. Implementation research to understand and address major program bottlenecks can provide evidence to lawmakers that we are making the best use of their financial resources.

Thanks to advocacy, Congress has begun to increase funding for global nutrition programs and has shown strong commitment to nutrition and related areas, such as agriculture, water and sanitation. This year Congress provided $145 million for nutrition within the Global Health Account, despite the President’s budget cut to nutrition to $78.5 million and reduction to foreign assistance budget by 33 percent. Clearly, children surviving and thriving and becoming productive members of their society, no matter where they live, is a priority for Congress.

But there is more to be done and you can help. 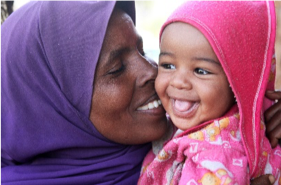 U.S. investment in global nutrition is still woefully low.  If we are to truly address the worst aspects of poverty and end preventable maternal and child deaths for good, then we have our marching orders. There is not a moment to lose because millions of lives depend on it. The U.S. and other donors must drastically scale up investments in global nutrition as a part of a comprehensive Maternal, Newborn and Child Health strategy and put an end to preventable maternal and child deaths once and for all.

To get involved click here and start advocating now on nutrition!

We thank Bill O’Keefe and Catholic Relief Services for their contribution to this blog. To learn more about their work click here.

Have an idea or a comment on any of the issues discussed above? We welcome your feedback – you can comment on this post on our LinkedIn feed or write to us at info@implementnutrition.org.

WEBINAR: How Can Advocacy Enhance Implementation Science in Nutrition?

“Advocacy” is the act or the process of supporting a cause or proposal. Effective advocacy can positively impact the implementation of nutrition programs by influencing decision making at local, national and international levels. On February 15th, SISN was delighted to host a live webinar with guest speaker, Bill O’Keefe from Catholic Relief Services. As Vice President for Government Relations and […]

Opinions, compilations and figures contained in articles included on this website do not necessarily represent the point of view of SISN